Or so said the Wicked Witch of the West as she melted into oblivion.

Fiction is wonderful, when it's going right. I've felt like I've been in oblivion for the past few months as far as my writing is concerned.

I am blocking out a new novel, and I'm cautiously enjoying it. Hope to have a snippet to post soon.
Posted by Cheryl Peugh at 6:45 PM 5 comments:

Doing Something I Swore Never to Do.....

Write a piece of fanfiction. I read the latest anthology Mercedes Lackey put out about her signature work, Valdemar, and thought, "I could do better than some of this stuff." So I did. Herewith is a snippet of it, with all the disclaimers in place---that this world belongs to Mercedes Lackey and not to me, etc., etc., and with all due apologies to Ms. Lackey.


Angel's Companion, Lia, alerts her to a visitor to Companion's Field.

As Angel approached the knot of Companions, she could hear the sobs and heaving breaths of someone whose entire world had fallen into ruin.

The Companions parted, and Angel could see the girl clinging to Lia's cannon, her face buried in the Companion's knee.

:You do attract the little girls, Chosen: Angel told Lia before she dropped her crutches to the ground, making as much noise as possible, and clumsily lowered herself to sit on the rough ground.

The girl raised a tear-blotched face.

The girl scooted away.

"Don't worry," Angel said. "You didn't do anything wrong."

When Angel made no other moves and said nothing further, just sat, arms resting in her lap, the girl relaxed and scrubbed at her face. Angel judged her to be about twelve, all skinny arms and legs, and with wild, uncombed brown hair. The flash of eyes she'd seen had been brown.

"Will you tell me your name?" Angel asked with gentle tones, rather like those she used for soothing a frightened animal. "Just so I don't have to say 'hey, you, girl.'"

"Sasha," the girl whispered, and hiccuped.

Angel did her the courtesy of not smiling at the sound.

Sasha tried to smile. At least her lips quivered as if making the effort.

"Journeyman status," Angel replied cheerfully. "Lia and I were out on circuit. We were, that is, until this." She thumped the cast on her leg.

"Did your leg get broken during a battle?" Sasha asked.

Lia snorted. :With a stirrup, maybe.:

Angel ignored her Companion and didn't volunteer the information that a mud-slick boot slipping from her stirrup while mounting had caused the injury. Some stories sounded better with bits left out.
Posted by Cheryl Peugh at 8:38 PM 1 comment: 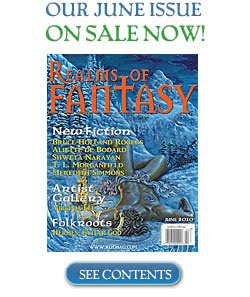 I just renewed my subscription to this magazine. I used to subscribe, years ago, but I drifted away. When I heard the mag might be in trouble, I remembered what I loved about it, and decided to buy a sub. Please help save a worthy venue for fantasy short stories.
Posted by Cheryl Peugh at 8:35 PM 1 comment:

Been awhile. Here's a snip of what I've been working on.

The Wyrd's subtle presence wound itself around her senses, feeling like the lightest of touches against skin.

Ania paused, her hand hovering above the door handle, and examined the Wyrd. She did not think it was meant to harm, merely alert someone to entry. Ania smiled wryly. She reached out and grabbed the door handle.

The Wyrd broke with a nearly audible twang. Whomever had spoken it would have received the backlash of a broken Wyrd. She hoped it gave them a headache.
Posted by Cheryl Peugh at 8:38 PM 1 comment:

I don't promote American Idol. I like to watch it, but I'm too old to really get into it. That said, however, I actually sprang for this girl's debut CD, and I was not disappointed. Alison Iraheta did not win AI, but she should have. The girl has serious pipes.
Posted by Cheryl Peugh at 7:19 PM No comments:

If, by chance, you haven't seen this movie yet, go see it. The plot was not a surprise--think "Dances With Wolves", but the world of Pandora is depicted on the screen in loving detail. If you do see it, try to see it in 3D. You won't be disappointed.
Posted by Cheryl Peugh at 6:13 PM No comments:

I've upgraded my computer. It was time. I've had the other for five plus years--in computer years, that's pre-Jurassic. I bought one with a quad processor. Right now, I'm in awe. That won't stick, but it's nice while it lasts.
Posted by Cheryl Peugh at 9:01 PM 2 comments:

Been a long time since I posted a snippet of anything, current or past. This happens to be current--a short story I'm working on.

The crew rushed to the rails, peering across the water to catch a glimpse.

Katya felt a rush of premonition. Dread weighted her muscles. She turned and sprinted for her spyglass. When she turned it to rear quarter, leeward, sails sprang to life in her vision. The sails were frayed and tattered--something no shipmaster worth his salt would ever allow. She searched the deck of the vessel under those sails, looking for any signs of life. There were none that she could see. The ship ran silent and dark. More important than that, she ran against the wind that filled the Dragon's sails.

She lowered the spyglass and squinted, then raised the glass again. Yes, she hadn't been mistaken. Dark clouds massed behind that ship. She turned. Rian, never far from her side, awaited orders.

"Bring her about and take in those sails!" Katya said.

"All hands on deck!" he bellowed. "Show her our heels! Reef the topsails! Haul up the mainsail!"

"Bring out the grapeshot," she said.
Posted by Cheryl Peugh at 9:22 PM No comments:

I'll have to post a picture. My forsythia bushes are sunny yellow, and my gorgeous crimson tulips are blooming. Jonquils wave in the breeze. Okay, more of a rain-laden blast at the moment, but still. Best of all, it's been warm.

I've written a short story that needs work, and I'm working on another. I think I'm putting off working on the novel by writing them. Need to stop slacking.

Friday, I hope to put up a snippet. Been awhile since I've done that.
Posted by Cheryl Peugh at 8:47 PM No comments:

If it would show up. *sigh* I'd really like to post something positive for a change. So here goes. I'm getting better. It's been a long, slow haul, but I'm beginning to improve--both physically and mentally.

Wintersland has been calling to me. I'm beginning to feel as if I could do some work on it. Sitting in front of the computer for long periods of time has been a major problem. I sit at work, so that had to come first, and, since early December, I'd done all the sitting I could do by the end of the work day. And, let's face it, you don't feel like writing when you're in pain most of the time. At least I didn't.

Somehow, it's all inextricably tied in my mind to the arrival of Spring. If Spring would just get here, I feel like I could come alive as everything else does.
Posted by Cheryl Peugh at 8:42 PM No comments:

Haven't posted here in a long time. I've had a virus in my abdominal wall since November and in-and-out of the hospital. Last go around was six days, from the 30th to the 5th. I basically lost interest in doing anything--writing, posting to the blog, reading---I just existed. The stupid tv was the only thing going, esp. in the hospital. Still not over the virus, but at least I'm getting more rest at night and out of the hospital.
Posted by Cheryl Peugh at 11:26 AM 2 comments:

If I had a dime, for every time
Someone hated, or freighted
An opinion with personal vindication,
I'd take a vacation in the sunny Carribean,
Every day sublime, until I'm ninety-nine.

One writer's impression of life, love, and the pursuit of happiness.

The occasional snippet from my works-in-progress.